Busy outside, quietness within

“Amazing, the daily support. I read the emails every morning sitting at the edge of my bed!”

Is your life very busy? How would it feel to truly be more free from stress and be able to enjoy the moment? Find quietness in yourself amidst of the busyness around you.

For whom: do you recognise this?

You are juggling a hundred different things, and there are a thousand things on your mind.

You are doing a lot, but you feel like you are barely present. The days and weeks are slipping through your fingers.

You are a multitasker, but you notice that your attention can be massively divided. You could concentrate more.

You are exceptionally good at planning, organising and thinking ahead. You notice that you are often so occupied with the future or what is going to happen that you forget to experience this moment. You want to learn to act in the here and now, without letting yourself be distracted by other things.

You often worry and this is making you uneasy. And impatient towards your children.

You want more quietness in your life and rest with yourself.

Mindfulness tecniques have proven to enhance focus, memory, stress resilience and inner calmth and important leadership skills. You don’t learn this in just one day; you develop mindfulness by regularly doing attention exercises. This creates more freedom of action and you can do your job and live your live with more energy and clarity. This causes you to be freer from stress. And you can enjoy life more.

Learning properly in an effective way

Developing mindfulness takes practice. Maybe you have already become enthusiastic, you downloaded some apps, but you think it might be hard to find moments in your daily life to practice. Or one of the following things apply to you right now:

You want a method that really works, also in the long term.

You are willing and have time to invest in yourself the coming two months by practicing.

You would like to do a proper mindfulness training, but you have a good reason to not want to take part in a group training, or you find learning online to just be very practical!

You want to profit from the ease that an online training can offer you: you want to read the assignments at the moments available to you, on your own computer, laptop, Ipod or smartphone.

You want to learn without losing precious time to travelling.

You want personal guidance fitted for you and you want the inspiration offered by a group.

You have a good colleague who also wants to destress. You expect that you can help each other by doing the eight weeks together: because you remind each other at work to have moments of rest, maybe by doing short exercises together during a working day.

Then, the eight week mindfulness training Busy Outside, Quietness within is for you.

As a business coach I know how effective e-learning can be for people wanting to make steps. It grants the possibility for intensive support, and that is what you will receive during this training: you receive emails daily! My participants look forward to these: They read the email sitting on their bed, or right when they start their day at work. This is how you really integrate mindfulness in your life. As a trainer, I do a weekly check on how you are doing together: how it is going: what is going well, what do you need help with? In the skype sessions you learn a lot from your peers, inspire each other and receive advice and feedback for all the questions you might have.

Busy Outside, Quietness Within awards you for the effort you put into it. Because of this the training will really benefit you and make a difference in your life.

What will it do for you?

You become free from worrying and difficult emotions.

You become truly more free from stress. And less impatient towards your children.

You learn to integrate attention moments in your daily schedule. In these moments you are completely present in the here and now. You do this over the course of eight weeks, so that you will keep doing it after.

You become more able to concentrate and focus yourself.

You start taking breaks at work.

You learn to single task rather than multitask.

You become more free from ineffective (working) habits such as pushing through, pleasing, avoiding conflict, shifting up a gear, perfectionism.

You start to work more effectively and live more easily.

Every week consists of a theme. These themes can be immediately applied in your daily life and work.

Week 2: Seeing with a fresh look

Week 8: Continuing to apply mindfulness in your daily work and life

a one-on-one coaching session about your goals

a short email every day to support you with short reminders, explanation and invitations. This way you are actively being supported to apply things in daily life.

Zoom sessions in week 1, 3, 5 and 7 in which you receive receive tips, advices and feedback on your specific questions

weekly updates in which we keep track of your advances and receive feedback from me (time investment is only two minutes, but very useful to keep practicing)
one-on-one coaching session in week 8

The learning material remains available to you after the training
You work in a small group (max. 5 participants).

When should you not take part in the training?

In some situations it is advisable to delay your mindfulness training.

When you are in a crisis situation, or a currently very grievous conflict, or when you are in the middle of a burn-out, it can be better to find a different form of help and start a mindfulness training at a later stage. When in doubt, discuss this!

If you feel no motivation at this time, or don’t have the energy or opportunity to practice regularly over the course of eight weeks, it can be wise to wait for a period in which you can practice. Only by practicing regularly will you really be able to notice the effect. If you follow the training without practicing it is a waste of your time and money.

“I expected while meditating I would get into some kind of a ’bubble’, and would seperate myself from other people. It is wonderful to notice that it is the other way around: I get more into contact with myself and therefore easier into contact with others. It helps me to be a more effective trainer and coach.” Ruth Stoffel-Kauflin, eigenaar Kauflin Coaching, Team- und Organisationsentwicklungen, Zofingen.

Other quotes of participants:

“I have learned and applied ways to create rest. I stop chasing more easily and I have got the feeling that I can always do something about any situation”

“It becomes increasingly easy to take an open and neutral stance that gives space to others. I am living much more relaxed”

“For years I have had the need to create more rest in my head. I never got around to really do something about it. This course came precisely at the right time. I didn’t have to go anywhere, but I could determine my own moment to do the exercises. And because the stimulating email, you still know you are not doing it alone and that everyone is encountering difficulties. I have discovered that mindfulness plays an important role in my life. Just to be a nicer person!”

“What I absolutely liked about the training was the amount of emails. Time and again a reminder but always in a different way. An inspiring text, an exercise or an attention moment…”

Send an email to contact@stresslooswerken.nl to inform when the next course will start.

The online learning material remains available to you after the training.

Yvonne, why would I make this investment?

I have made lots of information available to you in small pieces and structured it for you.

Because of this structure and rhythm you can apply mindfulness exceptionally easy every day. Where a normal group training gives your weekly homework and reading material, this training you are engaged with mindfulness daily and in small steps. You get correctly sized chunks of information every day with new invitation and reminders. Different from an app, the inspiration comes to you actively, you are really stimulated to work on mindfulness on a daily basis.

People learn by practising and applying things in their daily life. By practicing regularly you start noticing changes. This is precisely what this structure supports you with.

2. In this training you can read the emails and do the exercises exactly when it suits you.

You have no travelling time roun the training days and no group meetings on working days. This saves you a lot of time and money! It also saves money for your employer: you are not absent for important parts of the day.

I closely follow you through the weekly updates, I give you tips and advice cut out for you and what you currently need for your process. In the Skype session you can bring up everything that occupies you, that is hard. Or what is going well! In the guidance you can profit from my experience as a business trainer/coach, psychologist and mindfulness practitioner. Do you have a question? Then I am readily available. 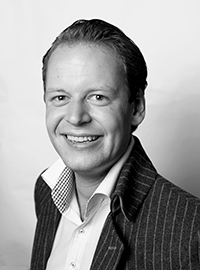 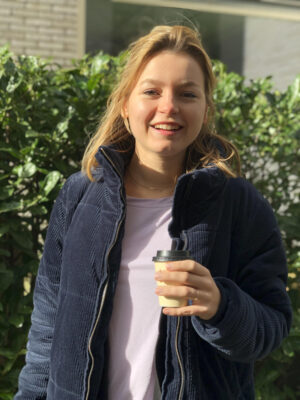 Carlijn (22), in afstudeerstress, over Mindfulness.

From now on the programme can be followed in English as well: find here all information!